As you crane your neck to take in the 145 iron stairs – 115 feet of climbing in all – that await, you can’t help but grumble that, dang it, the view from the top of the Point Arena Lighthouse had better be stunning for all this vertical effort you’ll be undertaking. 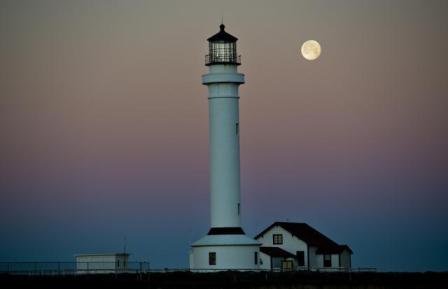 Once you alight atop this dizzying height, you catch your breath and a first glimpse. You are not disappointed.

Most people will turn westward and peer at the unfathomable blue, bordered by jagged cliffs eroded into statuesque pinnacles and arches that send spouts of mist skyward. On this day, whales were breaching in the distance and, closer to shore, sea lions barking for attention.

Look inland, though, and you’ll see something equally as amazing, if more subtle in its presentation.

Open space abounds. Vasts swaths of tawny bluffs and coastal plains, punctuated by stands of wind-swept cypress trees, stretch northward beyond the mouth of the Garcia River and up to Manchester State Beach and south beyond Point Arena proper. Less visible, but no less important, are native mountain beavers, red-legged frogs and Behren’s silver-spotted butterflies that call the grassland home.

To think that this pristine patch of shoreline, mostly unchanged since the Pomo Indians first caught sight of it, once was slated to be the site of a nuclear power plant and, in more recent years, a small housing development.

Yet, this is Point Arena, a quirky, charming and contentious liberal small town in southern Mendocino County that doesn’t agree on much but does value preservation above all else.

Over the decades, the citizenry has saved and rehabilitated the lighthouse after the Coast Guard decommissioned it, renovated and reopened a classic art-deco movie theater on Main Street, rebuilt its fishing pier down by the cove and turned the wharf master’s former quarters into a boutique hotel and the erstwhile Coast Guard house into a charming bed-and-breakfast, even turned an aging general store into a library. Heck, there’s even a former corporate executive here who has opened an African wild animal preserve in town (see “Discoveries” column).

But the most sustained civic effort, aided by governmental programs and nonprofits, has been the preservation of the Stornetta Public Lands, acquired from the dairy-farming family in 2005, and, farther south, the acquisition last summer by the Trust for Public Land of 409 acres belonging to the Cypress Abbey Co. That open land, which abuts Point Arena’s City Hall to the east, had been tabbed for a PG&E nuclear plant in 1973, before public opposition scuttled the plan. Small housing development proposals had been floated over the years, fought by locals.

To ensure the open space stays open, Rep. Jared Huffman, D-San Rafael, has been pushing a bill that would expand the California Coastal National Monument – at present incorporating only offshore areas on the northern coast – to cover most of the public lands bordering Point Arena. Three months ago, Secretary of the Interior Sally Jewell hiked the area, climbed the lighthouse steps and held a town meeting about giving the land monument status. Executive and congressional action are pending.

“We have an opportunity here to not only support the community’s vision to conserve the land,” Jewell said, “but also to create a world-class destination for outdoor recreation and the study of coastal resources and to strengthen the local economies.”

Such sentiments went over well among townsfolk. But not even the town’s most ardent cheerleaders truly believe Point Arena will achieve “world-class” travel status. They are fine with that and, really, would just like a little more tourist business to boost the economy still recovering from the recession, maybe siphon off a few travelers from Mendocino, the bucolic enclave 35 miles north.

Indeed, Point Arena, with 440 residents, is one of California’s smallest incorporated cities. Over the years, it’s passed quirky resolutions such as the 2000 declaration that “corporations are not persons.” When you say it leans to the left, that’s not just because of the shifting ground from the nearby San Andreas fault. In 2008, when the city celebrated its centennial, Sinnott produced a satiric town seal declaring: “Point Arena. Home of Opinions. Where Humility Goes to Die.”

But it’s just this type of passion that has kept Point Arena vibrant, solvent and interesting, said Mia Gallagher, owner of the Coast Guard House Historic Inn with husband Kevin.

“The really great thing about Point Arena is that the people make things happen,” Gallagher said. “We put together our own theater, our own library, renovated entirely by our own hands. We put together a bank building and got ourselves a credit union. We built a clinic, a dental building. When the lighthouse needed to be renovated, that was mostly – there was some matching funds from the feds – done locally by fundraising. It’s a self-sufficient community made up of a lot of different types of people.”

A distinct hippie patina, with shades of redneck rural daubed in, colors Point Arena. Take Lena Bullamore, owner for the boutique Everything Under the Sun for 25 years. In lieu of a sign showing store hours, Bullamore wrote a note taped to the window: “This is the true story about Lena and the hours she keeps. … She loves this shop and all it stands for and the wonderful and interesting people who come here. However, she … has such a hard time leaving (home) to come here. … She does not want to be a hippie flake but can’t seem to stop having SO MUCH FUN at home.”

In other words, uh, the store was closed. Time is malleable here. At Uneda Eat, a locavore restaurant/market, hours are listed as “5ish to 8ish.”

Sinnott is another interesting type you’ll find along Main Street, amid the bars, small grocery stores and a quirky bakery named Franny’s Cup and Saucer. A mixed-media artist whose home/gallery is called Art Goddess and is adorned by winged figures sculpted onto the roof and facade, Sinnott has an MFA from Rice University and, in the late ’90s, bought an old school bus and drove from Texas to California to remake her life, landing in Point Arena because “friends told me it was liberal.”

She draws and paints – she has an ornate series of Renaissance-period “face card” watercolors of “The Queen of Diamonds Paying Bills” and “The Queen of Clubs Drinking Coffee and Reading the New Yorker.” She also produces a series of purses called Velvet Vulva, shaped like the female genitalia, which the local paper reported offended some residents.

Her flamboyance, people here says, is one reason she and three other council members were recalled in a special election in 2011. (Another reason is that the council fired a city clerk.) To show just how small a town it is, “One of my recallers is my neighbor. He also was my son’s teacher. It’s crazy. We’re all so connected. And, like most littler places, people feel they have to band together for the important things. But that doesn’t mean the town is not without its complexities.”

Small-town squabbling aside, nowhere is the community spirit of Point Arena exemplified more than at the lighthouse, arguably the town’s main attraction.

“The Coast Guard shut down the operation in 1977, brought up the automatic light and dismissed all the maintenance people and, in ’82, they said they were going to shut the lighthouse down altogether,” said Thayer Walker, lighthouse docent. “The local folks organized. It took a long time, but they saved the lighthouse. This is a small town. Go 30 miles north or 30 miles south, and there’s still only a total of 4,000 people. So if you’re trying to raise millions of dollars, you don’t have a lot of resources. But they got it done by 2008. They even renovated the lighthouse keeper’s houses. They used to leak.”

Not anymore. Those cottages a few feet from the lighthouse now are upscale rental condos, ranging from $185 to $320 a night. Thayer says, back in the day, keepers and their families living at the lighthouse didn’t have the modern amenities – no satellite TV, no Wi-Fi. But you can still get a feel for what life might have been like. Once evening falls, the area turns pitch black, so black it’s almost a nullity. That only heightens the reverberative sounds of waves crashing into the cliffs. Come sunrise, you awake to whitecaps breaking along the exposed coast where the Garcia River meets the ocean.

The scene evokes a feeling of impermanence. Every year, Walker said, erosion takes away 6 to 8 inches from the bluffs. He showed a photo of the lighthouse area in 1880 and one today, and the loss of land mass is striking. The lighthouse itself, Walker said, may become history, since “the Coast Guard has been making sounds about shutting down all lighthouses, not even using the (automated lights). This is a historic anachronism. You don’t need lighthouses. Everybody’s got GPS to navigate by.”

“Oh, this will still be here,” he added, meaning the lighthouse itself. “It just may not be operating.”

Of course, Mother Nature might have the last word. For all the preservation efforts townsfolk have made, for all the plans for growth, Point Arena is right on the San Andreas fault. In 1906, when the Great San Francisco Quake hit, the land mass here moved 16 feet in fewer than 15 seconds. Walker said the area hasn’t felt a significant jolt since then. It’s due.

“Nothing was left standing – except the lighthouse, the one thing you’d expect to tumble over, right?” Walker said. “There were a lot of cracks, and (in 1908) as they started tearing it down to build a reinforced lighthouse, they removed bolts from the staircase – the same staircase you’ll be walking down – until someone finally figured out it was the staircase that was flexible enough and strong enough to absorb the shock. So the chief engineer said, ‘Why should we built a new staircase? It survived an 8.3 quake. We’re using that sucker again.’ ”

They certainly know their preservation here.