If you’ve heard of making phone calls via Skype or streaming music via Spotify, then you’re halfway to understanding why the online giant Yahoo acquired a nascent company started by a young graduate of Oak Ridge High School in El Dorado Hills. 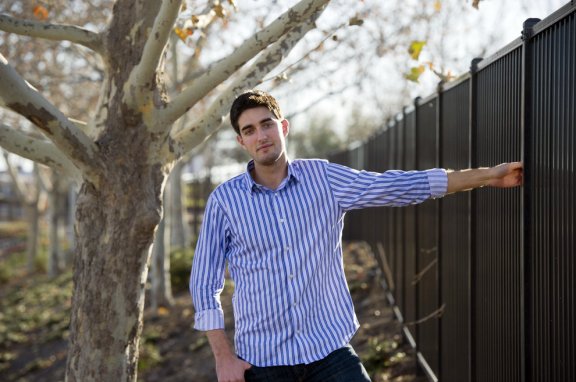 Feross Aboukhadijeh was Oak Ridge’s valedictorian in 2008. He graduated from Stanford University in 2012 with a bachelor’s degree in computer science. Last March, he put his master’s degree on hold at Stanford to start a company called PeerCDN with two friends from college, Abi Raja and John Hiesey.

Aboukhadijeh liked how Skype and Spotify largely cut out the middleman. They distribute their content to customers without using a content delivery network, or CDN, a huge system of servers, to deploy it. Rather, they use the bandwidth of users in what is known as a peer-to-peer network.

“The idea with Spotify is you pay $10 a month to get this music app that you can use on your computer… ,” Aboukhadijeh said. “It’s basically like iTunes, but imagine you have every song in your library that you can search and play at will. … What most people don’t know about Spotify is that it uses peer-to-peer technology. So when it plays a song, if someone else, say in Sacramento or in California, has recently played that song on their computer and they still have the Spotify app open on their computer, then their computer can just send me that song. The server doesn’t have to do that work, and it saves Spotify a ton of money. And it makes that service so much cheaper, so we all can use it for a smaller fee. That’s a huge win, right?”

At PeerCDN, Aboukhadijeh began perfecting his idea of using the latest generation of Web browsers to do much the same thing for other companies that deliver large amounts of data to customers. The less server bandwidth companies use, the less they have to pay. Reliability, however, is also crucial. If a browser is old and doesn’t have the capability, Aboukhadijeh said, then the site just loads normally from the server. If you’re trying to load something from a site that not that many other people are using, then it also is delivered by the server.

“Our code sits in front and it tries to take over whenever it can, whenever it thinks it can deliver the content over peer-to-peer that’s just as fast,” Aboukhadijeh said. “But if it can’t, then it just sits back and lets the regular CDN deliver it.”

Aboukhadijeh started experimenting with computers long before he got to Stanford. His parents, Hassan and Cindy Aboukhadijeh, bought him his first computer when he was 4.

“They got it from a garage sale for like $25,” he said. “It wasn’t the best computer, but it was cool because I was really little, and I got to play with it and figure out how it worked. … My dad showed me a couple of things, how to open a program, how to install some things on it. It was a really old computer, so there was no graphical interface. It was all commands.”

He coded and designed his first Web page while at Arcade Middle School to illustrate his science project on frogs. He had learned how to do HTML with the help of a program that his father had bought him.

“It let me type as though I was typing in a word document and it would reveal the HTML code,” he said, “and it was cool because you could put them side by side. For example, when you decided to bold some text, you could see what code it generated to bold it. So it would be just as if you were in a program like Word, but you could see exactly how the two connected. That’s when I realized this is all powered by HTML. I think that’s when I decided I should learn to do HTML work.”

As a freshman at Oak Ridge, he joined the tech team. He recalls it as an unbelievable opportunity for a high school kid.

“It was a group of students who went around and fixed computers that weren’t working,” he said.

Also while in high school, Aboukhadijeh created a site for videos that he thought were cool. This might not sound so amazing in this era of YouTube, except that YouTube wasn’t born until a year after the high school freshman launched www.freetheflash.com. Roughly 600,000 visitors checked out the site within a year, and although Aboukhadijeh keeps it visible for the sake of nostalgia, he told me that he now considers some of the stuff pretty tasteless.

The site he created as a high school junior is anything but. In fact, teachers send students to usewww.apstudynotes.org. More than 300,000 a month visit, and the site generates enough revenue to pay the rent at Aboukhadijeh’s Mountain View apartment.

“It was a collection of all my notes from my AP classes I was taking in school,” Aboukhadijeh said. “I took really detailed notes, and I thought that if I put them online, other students could benefit. … A bunch of people started using it and sending me their notes.”

He has since designed a way to allow any student to upload their notes, and he’s given the site a new interface. You would think it would be impossible for Aboukhadijeh to top this site’s usability. But while he was in college, Google created a lot of hoopla by announcing it was creating something called Google Instant that would allow people to instantly begin to see their searches popping up as they typed. It would take a while before all users got to see it, Google leaders said, because it was going to be so difficult to engineer.

When Aboukhadijeh got home, he and a roommate began discussing just how much of an innovation this was. Wouldn’t it be cooler, Aboukhadijeh thought aloud, if you could get music videos to pop up as you searched? So, he bet his roommate he could create a YouTube Instant site in an hour. It ended up taking three hours, after which he posted the www.ytinstant.com link on his Twitter and Facebook pages.

When he woke up at 8 a.m. to get a glass of water, he saw to his astonishment that he had 10 missed calls and 40 emails. His site was an overnight sensation, and journalists were trying to reach him. He never got the glass of water. A day or two later, Chad Hurley, then CEO of YouTube, tweeted him a job offer. Within 10 days, the site had 1 million visitors.

The young tech guru and his partners now work at Yahoo as engineers, so grad school is still on hold for him. He can’t say how much money he made when he sold PeerCDN to his new employer.