Douglas County must be the best-kept secret in Nevada. 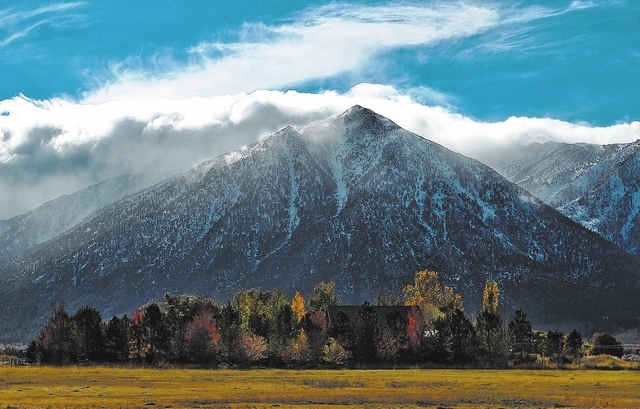 Lying just south of Carson City, here one finds the lush, green, 20-mile long Carson Valley dotted with ranches covered by grazing cattle. And 1,400 feet above the valley floor lies the southern half of Lake Tahoe, with some of the most beautiful scenery in the world. This is where Nevada’s first Anglo residents settled in 1851 — although that was about 9,000 years after the Washoe Indians arrived to live a nomadic life of gathering pine nuts and hunting rabbits in Carson Valley, except for fishing and summering at Lake Tahoe. They knew a good place when they saw it.

But outsiders slowly are discovering this place of clean air and beauty. Until the Great Recession five years ago, wealthy California retirees — like the late Bing Crosby’s wife Kathy — were buying ranches near pricey Genoa. Ever hear of Friesian horses, the horse used in European wars? There are ranches here full of the beautiful and costly black horses. Others were purchasing multimillion-dollar homes at Lake Tahoe’s Stateline and in the pine forests on the west side of Carson Valley. The boom brought skyrocketing land and home prices that priced many people, particularly those with children, out of Douglas County.

Growth largely has been halted since the recession. State demographer Jeff Hardcastle in mid-October estimated the county population at 47,414 and projected no growth for the next three years. Growth then will average about 0.4 percent annually, less than half the state average, with the population rising to 50,531 in 2032. On the bright side, a 2010 U.S. Census report put per capita income in Douglas County at $35,239, the highest in the state and about $8,000 higher than Clark County and the U.S. average. Median family was put at $73,543. The county school population this fall was measured at 6,150, down 1,000 students from 10 years ago.

What state Sen. James Settelmeyer, R-Minden, likes most about the county his ancestors settled in 1880 is the mountains. In any direction you look at mountains, including Job’s Peak, which towers 7,000 feet over the valley. “The mountains are cradling to me,” he said. “When I leave I miss the mountains. They make me feel at home.” He figures more Californians have discovered Douglas County in part because Nevada has no personal income tax and they can save 10 percent on their taxes. One positive aspect of the recession is that home values dropped, making it more affordable for moderate income families, he added. The county’s future will be brighter if there is a variety of people of different ages, not an excessive population of senior citizens, he said.

The First Territorial Legislature in November 1861 laid out boundaries and named Douglas County after Sen. Stephen O. Douglas of Illinois. Douglas had died that June 3 and had lost the presidential race to Abraham Lincoln a year earlier. By then, the Washoe lands had been taken by white settlers with the Indians becoming their servants and ranch hands. Douglas was a Democrat, an anathema in two-thirds Republican Douglas County, where a Democrat hasn’t been elected since 1982. Just recently the local Record-Courier newspaper carried a letter from a person who said he has been repeatedly insulted because his vehicle carries an Obama-Biden sticker. The story of Douglas County really is the story of the Dangberg and Bently families. German immigrant Heinrich Friedrich Dangberg arrived in 1856 and opened a small ranch. But one day he came home to find a tough gunslinger Lucky Thornton claimed the ranch as his own. Dangberg started another ranch about a mile away. This became the Dangberg Home Ranch and was the start of his empire. By the time he died in 1904, Dangberg’s ranch covered 20,000 acres, and with his four sons and daughters, the H.F. Dangberg Land and Live Stock Co. would own 56,000 acres, including Thornton’s ranch.

In 1905, the Dangberg family founded the town of Minden, named after the German city from where H.F. had been born. They opened a bank, started a creamery, flour mill, wool warehouse, potato fields and apple orchards, and ran thousands of head of cattle and sheep. Minden would replace Genoa as the county seat. But H.F. was not popular. In 1879, the state Senate seat he won by two votes was awarded to his opponent. The other Douglas County czar was Don Bently, who died two years ago at age 87. An electrical engineer, he founded Bentley Nevada Corp. in 1961, and the company began creating sensors to measure vibrations in machinery. The Bently company became one of Douglas County’s largest employers with 1,200 local workers. He sold the company to General Election in 2002, but Bentley kept thousands of acres that he used for agriculture experiments, including the development of bio-fuels. His son, Christopher, recently announced plans to convert the long-closed Minden Flour Milling Co. into a distillery called Nevada Heritage. A new state law permits the development of local distilleries.

People who cannot afford to live here can always take a bottle of bourbon home.

▶ Named for: Sen. Stephen O. Douglas, D-Ill., the Democratic candidate for president in 1860