For more than 80 years, the boxy Zephyr Point Fire Lookout has stood as a landmark on Lake Tahoe’s eastern shore and as a sentry against fire danger. 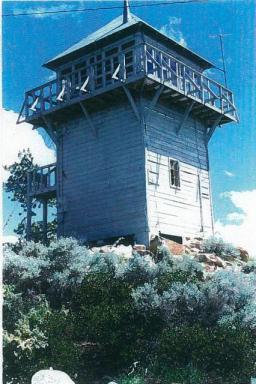 But growth has diminished the effectiveness of the once-remote fire lookout – homes and a water tank now partially obstruct its views – and the U.S. Forest Service is proposing to move it about 10 miles to an undisturbed site.

At the proposed new location on government land above Spooner Summit, fire crews would be able to observe more of the Lake Tahoe basin, the Forest Service says, and the public would be able to visit the lookout and enjoy its views – something that is not possible at the current site in Zephyr Heights.

“Valued scenic attributes in this area are the forested views and distant views of Spooner Lake, Lake Tahoe and the Sierra Nevada crest,” the project’s draft environmental assessment report states.

Built on private property in 1932, the approximately 30-foot-tall building is the only remaining Forest Service lookout in Nevada, and its design and rarity make it eligible for the National Register of Historic Places.

“It is one of only 12 remaining 4AR-style cabs in existence,” said John Maher, the project’s team leader and heritage resource program manager for the Forest Service’s Lake Tahoe Basin Management Unit. “4AR is the design of the lookout and cab is the lookout’s living space structure.”

The 4AR design includes light-colored paint and “a big square room with a table in the center,” he said. The furnishings are no longer there, but previously “on the table was a map and a device for identifying the location of smoke, called an Osborne Fire Finder.”

The room, surrounded by windows and a catwalk, also contained a radio on a smaller table, a few chairs, a cot and a kitchenette. Downstairs remain a bathroom and storage area.

The proposed relocation site atop White Hill overlooks the intersection of Highways 50 and 28 near Spooner Lake. Views from the new site will not be affected by infrastructure or other man-made structures, such as houses and above-ground utilities, the assessment report found, and it will provide better sight lines to cover the north and west portions of the Lake Tahoe basin. Other portions of the basin are covered by the Angora and Martis Peak lookouts.

The Zephyr Point Fire Lookout was staffed regularly during fire season from 1932 to 1984 and, after that, only when staff was available. Since 2001, no one has lived in it, but fire crews have used it during and after thunderstorms to spot smoke from lightning strikes. It would continue to be staffed during thunderstorms at its new site, Maher said.

The public may have access not only to the new site, but to the lookout’s catwalk “after the Forest Service reviewed safety concerns,” he said.

Asked whether the lookout eventually may be available for rent by adventurous vacationers, Maher said, “Although we are considering that, it is not part of the current environmental analysis and would require additional analysis to go forward.”

For the move, the lookout would be dismantled, then reassembled atop a new concrete foundation. An existing Forest Service road to the site would be improved, a parking area designated and interpretive signs installed. Depending on funding, the approximately $25,000 project could begin next summer or fall and would take at least several weeks to complete, Maher said.

Forest Service officials believe the lookout would retain its eligibility for the National Register at its new location, because the register considers setting as one of its factors when conferring historical status.

“By moving the lookout to the new site, the setting is restored to a remote forest location, similar to what the setting was when the lookout was first built,” Maher said.

“We haven’t thought about what we would call it (in its new location),” he said. “I assume it will be called the Zephyr Point Lookout at White Hill.”