Fall is a comfort season in the Sacramento region. Sunshine feels warm and gentle. Clothing is roomier and softer. Social commitments and home chores are not so demanding. In the summer, dinner is often rushed so the family can scatter for evening activities. But in the fall, the pace slows. We hunker down, surrounded by friends, family and pets. 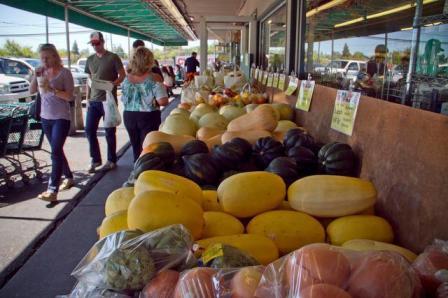 Even meal planning in the fall is more leisurely. Instead of tossing burgers on the grill for a quick meal, this time of year we tend to do more baking, stewing and slow-roasting, filling our homes with the wonderful aromas of pumpkin bread, persimmon cookies and homemade soup.

A stroll through the farmers market on a recent Sunday morning proved the point: Fall is a wonderful time to live in Northern California.

Perry Rogers was enjoying his Sunday morning ritual. With canvas bags slung over one arm and a stash of dollar bills in his pocket, he stopped to chat with a farmer about carrots. Rogers and his wife, Ginny, shop the year-round farmers market at 8th and W streets under Highway 50 nearly every week.

“We’ve been coming here for years,” said Rogers, who lives in Arden Arcade. “We always had a large garden when I was growing up in Idaho, so I have always loved fresh fruit and vegetables. Now we don’t have the space for a garden, so the farmers market is the best alternative.

“I enjoy buying directly from the farmers and over the years we’ve become acquainted with many of them. I know who grows the best peaches, the best tomatoes, the best carrots. Many of them grow organic produce, which we appreciate. Best of all, we find things at the farmers market that we can’t find at a supermarket, like fresh peas or fava beans.”

Rogers’ approach to shopping is simple: “First make a slow walk through the market to see what’s available and check prices. Then go back to do your buying,” he said. “I always take my own bags because it’s easier than trying to hold a bunch of small plastic bags. Plus, bringing my own saves the farmers money and helps the environment. If I’m planning to buy something that’s fragile, I usually take a box to put it in so it won’t get bruised on the way home.

“Since we buy locally grown produce, we eat what’s in season, which we believe is more nutritious and has more flavor than produce that has been picked before it is fully ripe and shipped long distances. If we are looking for something special, we ask the farmers when they expect it to be available, and sometimes they will even share a sample.”

The day we met up with Rogers, he was hoping to score some late-summer fruit and vegetables. “It’s late in the year, so if I can’t find them, it’s OK,” he said. “We’re also looking forward to apples, fresh potatoes, winter squash, broccoli, cauliflower and good carrots. It’s a long list.”

“Fall is an interesting time of year for locally grown fruit and vegetables,” said Glen Ikeda, who co-owns Ikeda’s Farms and country market in Auburn. Ikeda works closely with the California Farm Bureau Federation as an expert on California produce. “Because of our mild weather, you can find a few summer vegetables and fruit, such as corn, peppers, melons, tomatoes and table grapes, until the first frost or rain. But we have a wonderful variety of produce that peaks during the fall.”

Like Rogers, we were looking forward to the first winter squash of the season and were on the hunt for butternut, a personal favorite. We were not disappointed.

Winter squash, while it may seem intimidating because of the firmness and size, is packed with flavor and takes very little prep in the kitchen. Just cut the squash in half, scoop out the seeds if you want, then brush it with a little olive oil. Place it cut-side-down on a baking sheet and roast at 375 degrees until tender. Because of the firmness, roasting might take an hour.

While winter squash is wonderful just plain, my plan for the butternut we picked up at the Sunday market was to roast it, then scrape the soft pulp into a stockpot, add some sauted onion and garlic, a little brown sugar, grated fresh ginger, cinnamon and chicken broth. Simmer the mixture for about 10 minutes, just long enough for the flavors to meld, then whip it up with a submergible blender or in the food processor for a yummy, creamy soup.

Of course, you need to add pumpkins to the list of winter squash. Granted, we tend to think of them as decorations rather than food, but if you are adventuresome and want to make a pie from scratch, look for sugar pie or fairytale varieties. They will be sweeter and have more pulp than pumpkins grown for carving. Cook them just like you would any other winter squash.

“Certainly apples and pears come to mind in the fall because we grow some of the best right here in Northern California,” said Ikeda. “Apples are harvested through late fall. There are many varieties so choose them based on how you plan to use them. Fuji is a personal favorite. It has a firm, crisp texture and a slightly tart flavor. Granny Smith are often favored by pie bakers and they are great when diced up and added to a salad. Red Delicious is what we think of as lunch-box apples because they have a mildly sweet flavor and a crunchy texture.

“Honestly, the best way to select apples is to simply buy a variety and figure out which ones you like best. They are all good in my book.”

As for pears, Bartletts, the ones with green skin that ripens to yellow, reign in the kingdom of pears – and for good reason. They are one of the best for just eating out of hand. They are also the major variety grown in California, according to Ikeda.

Eat your fill of Bartletts in the fall because the season is short. They do not have to be completely ripe when purchased, so don’t overlook those that seem a bit firm. They will ripen just fine on the kitchen counter. When they are ready to eat, the peel turns from shiny to matte, they will seem a bit soft when gently pressed, and they develop a beautiful floral fragrance.

When the weather turns damp and chilly, it’s also showtime for persimmons. The fruit is fragile, so it’s not often found at supermarkets. Instead, you’ll need to search produce stands and farmers markets – or grow your own. There are two basic types, those eaten when soft and jelly-like, and those eaten when crisp like an apple.

The crisp ones are Fuyu. The soft ones are Hachiya. Don’t confuse the two because if you bite into a Hachiya when it is still hard, you’ll have a pucker experience you won’t soon forget. Hachiya needs to ripen until the pulp is jelly-like. You can speed up the ripening by placing the fruit in a paper sack with an apple for a day or two, or pop them into the freezer overnight. When thawed, they will be perfect for eating raw or for use in bread and pudding recipes.

Citrus, especially mandarins, are always a welcome sight at local markets in the fall. Their arrival signals the annual Mountain Mandarin festival, held just before Thanksgiving at the Gold Country Fair Grounds in Auburn.

“Most citrus needs four distinct seasons,” said Ikeda. “It goes dormant in the winter, blossoms in the spring, fruit sets in the summer and ripens in fall and early winter. There are a lot of varieties to choose from and the season does last a long time.

“Depending on the type, citrus season generally begins in November. Look for navel oranges early in January. The season for Valencia is just about the opposite of navel oranges. They begin to ripen in early spring and last through October. Tangerines and Tangelos have a shorter season that runs about January through March.”

Cruciferous vegetables, which are members of the cabbage family, also peak in the fall. The list includes broccoli, cauliflower, Brussels sprouts, kale and cabbage. At a recent market we found Brussels sprouts on the stem, which not only looks beautiful, it keeps them fresh longer, according to Ikeda.

It is also a good time to search for root vegetables. Although they are available practically all year, we tend to think of them as fall or winter vegetables, probably because they take a long time to cook. Plus, roots such as carrots, beets and Daikon radish have bold flavors, a fact that for some reason sounds yummy when it’s cold outside. Parsnips, which look like big, white carrots, are best after the first frost because that cold snap converts the starch to sugar. Many varieties of turnips are also best right about now.

What else should we look forward to? It’s a great time for winter greens. As with roots, many of them are available year round, but in the fall the flavors are milder and sweeter. Included on the shopping list are Belgian endive, chard, and escarole. Spinach is available year-round, but locally grown it peaks in cooler weather. Edamame (fresh soybeans) also peak in early fall. And most potatoes are harvested in the fall.

So while you might be mourning the end of peach and berry season, there is a lot to look forward to when the weather turns damp and cool. It truly is a great time to live in Northern California.