Since Thursday, the retired school teacher has been creating images that Perry Leonard – owner of Radcliffe Academy – will incorporate into his curriculum for the students, ages 2-5. The school has 23 students, including five special-needs children. 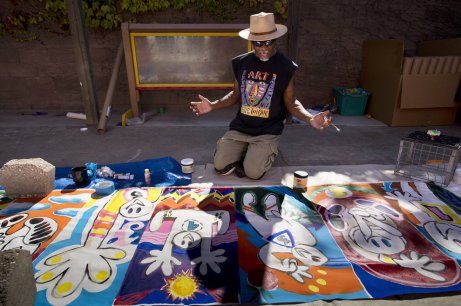 Onli and Leonard have been best friends since they met in the seventh grade in 1963, according to Onli.

They became friends through their mutual agreement to stay out of trouble while living close to gang activity in Chicago’s south side.

Leonard’s path took him to law and special education; Onli’s took him to art school and 22 years as a teacher in Chicago’s public schools.

Now that Onli is retired from primary schools, he said he wanted to bring his creative interests to Leonard’s school.

“I feel like it’s a cosmic convergence of friendship, education, the exuberance of being a child … and the power of the visual arts in education and learning,” Onli said.

Onli, 61, began drawing when he was 3. He earned degrees in fine arts and teaching arts from the School of the Art Institute of Chicago. He also studied at the Sorbonne in Paris, and at the Centre Pompidou. He currently teaches art appreciation and studio drawing to students at Harold Washington College in downtown Chicago.

The project he is working on now for the Radcliffe Academy is based on Onli’s comic-book character he created to help people learn about sustainability.

“I volunteered to do it when I looked around and saw the need for it,” Onli said. He was visiting Leonard when he noticed the lack of art around the school.

The images he created, numbered 1 through 10, are designed to help students at Radcliff learn numbers, gestures, shapes and colors.

He calls his artistic style “rhythmism.”

“Artwork has rhythm just like music,” Onli said. “I try to make the rhythmistic statement in my art.”

Part of that rhythm, he explained, has to do with creating a cadence or pattern of colors. It also has to do with recognizing what venue the art is created for. “I’m painting and designing it in a way that would be easy for children,” Onli said.

In addition to being used for learning the basics, Button-Heads can be used by teachers for a variety of learning needs, including promoting environmentalism.

“I needed this because I wanted the children to learn recycle, rethink and reuse,” said Penny Leonard, a teacher at Radcliffe and wife of the owner. She said students also will be working in their own garden and will take a trip to a recycling center.

“I’m using the Button-Heads to sell sustainability,” Onli said. “As an artist, it’s good to be able to address these things.”