Hypoxic but happy, I ascended the final jagged metamorphic-rock-strewn ridge and, at last, stood atop Mount Tallac.

Time to drink in the views — and goodly amounts of water. 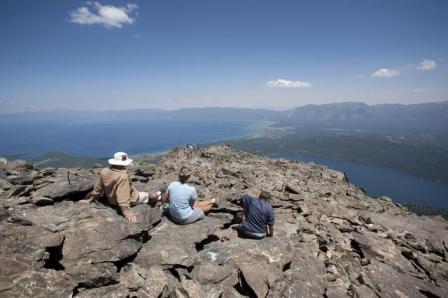 As I unsheathed my smartphone and started snapping photos — the shimmering, cobalt-blue splendor of Lake Tahoe and Fallen Leaf Lake, enhanced by vast stretches of coniferous forest, to the east; the sheer granite starkness of the Desolation Wilderness, dotted by more alpine lakes, to the southwest — I noticed two shadowy figures on an outcropping about 50 feet below.

It was a young man in a blue tank top, followed by an older man in bright yellow. They came my way, hopping from rock to jagged rock, waving in my direction and saying something inaudible.

So much for being alone with my thoughts. But this pair looked friendly enough, at least, and when they got close enough I figured out what they wanted.

“Hey,” the younger one said, “can you take a picture of us, and we’ll take one of you?”

Turns out, father and son Mike and Nicholas Vranes, from Salt Lake City and Boise, Idaho, respectively, had been waiting for another soul to summit so they could get their Kodak (uh, iPhone) moment together. They had been smart and set off on the 4.8-mile, 3,300-foot-gain trek early in the morning, before the cloudless Tahoe sun reached full potency.

Down the mountain, at least a half-dozen other groups were methodically tramping along morain ridges, up granite-studded switchbacks, through brief bursts of shaded forests abutting two small lakes, and over a headwall covered with quadriceps-crippling volcanic rock from the Pliocene era.

It would be awhile before the peak got crowded, so it looked as if I was the Vraneses’ only option.

I agreed to snap a few photos if they’d consent to an interview. At 9,735 feet above sea level, it was the highest I’ve ever been as a working journalist.

Turns out, the men had convened in South Lake Tahoe for an annual summer family vacation, about 60 family members strong. Mike, the elder, was wearing a pair of binoculars around his neck and had been peering down from that ledge to see if he could spot his boat docked at the Tahoe Keys far, far below.

“I wore yellow, thinking maybe they (the fam) could see me up here,” he said, laughing.

The Vraneses, elder and younger, said they targeted the famed Tahoe trails during this vacation. They had ridden the famous Flume Trail on their mountain bikes a few days earlier on the other side of the lake and had heard that the views were equally gorgeous, as well as more sweeping, atop Mount Tallac on Tahoe’s southwest flank.

“I googled ‘best trails in Tahoe’ and this came up,” Nicholas said.

What pops up when you do that search are facts that leave you wanting both to climb Tallac and shy away in favor of something a little less taxing.

“It was right,” Mike added. “It’s not easy, but it’s just beautiful up here. Turn and look behind you.”

The three of us had been transfixed by the big, blue expanse of Lake Tahoe spread out before us. Doing a 180, we were struck by the moonscape of granite that is the Desolation Wilderness, a view so encompassing that we could see clear to Lake Aloha. You go from a palette of blues and greens to gray with mere daubs of blue.

After a few minutes, we had run out of words to describe the views and just stood silently enjoying it. Then, we said our goodbyes and scrambled our way down the craggy talus to where the faint trail becomes slightly less faint and, eventually, gives away to a standard granite-boulder-strewn, high-country path back to the trailhead.

The great thing about ascending Mount Tallac is that you need no mountaineering skills. You need to be fit and not averse to climbing, no question. But it can be accomplished by most in time to grab a late lunch back in town.

After signing in at the trailhead kiosk for a day pass — required for anyone going into the Desolation Wilderness — you start pleasantly enough along an old road partially shaded by Jeffrey pine and white fir trees.

A half mile in, the terrain changes and you climb a glacier-formed ridge that overlooks Fallen Leaf Lake. This is a prime sightseeing area; you get unobstructed views of the lake on the left, and glimpses of Mount Tallac’s jagged peaks through the trees on the right. A bonus: The single-track path doesn’t have rocky impediments that force you to look down.

Though Fallen Leaf lies down to the left, you shortly will pass a more modest body of water — Floating Island Lake, so named for the vegetation bobbing on the surface.

Slightly less than a mile farther on — ignoring the Fallen Leaf Trail junction to the left — you hit another body of water, Cathedral Lake. The trail wends around the right shore through a copse of shaded conifers. The trail gets rockier from here. In fact, at one point, the trail becomes one with the creek bed, dry as dust in July.

You need to save your energy on this stretch because the headwall of the Cathedral Basin awaits. This stretch, about a mile, is arguably the toughest climb because it is relentless with swooping switchbacks and scree slowing you.

During this slog, take time to stop and check out not only the views of Lake Tahoe peeking out but also the collected talus, which looks like someone dumped out a bag of giant marbles and let them tumble down. Though traversing the headwall seems endless, it’s only slightly less than a mile before it levels out at 8,500 feet.

Don’t think about the fact you’ve still got about 1.2 miles and 1,200 feet of elevation to go. You can catch your breath — well, a little — in a meadow sprinkled with wildflowers. You’re also likely to disturb the banded wing grasshoppers, which rise before you like NSA-sanctioned drones and make a clicking noise. Don’t worry, you can outrun them. You’ve mostly left the trees behind by now, but gusts of wind help cool you.

It’s a steady, but not especially steep, climb to the junction with the Gilmore Lake Trail at 4.6 miles. You don’t need the sign post (but it’s there, anyway) to point you in the correct direction.

Just look to your right and you see scores of dark, jagged metamorphic rock — again, such a stark contrast to the beige of the granite — that you have to climb to reach the peak. But it’s just two tenths of a mile, so you can put up with the trail petering out. You just pick your way through the jagged rocks, making sure they are solidly in place before putting your full weight down.

Eventually, you run out of rock.

Linger a while at the summit, drink in those incredible views. Contemplate the meaning of life, but try not to contemplate that you now have to retrace your steps downhill on the jagged, ankle-twisting path. Know that Mount Tallac can be good for your soul, if not your soles.