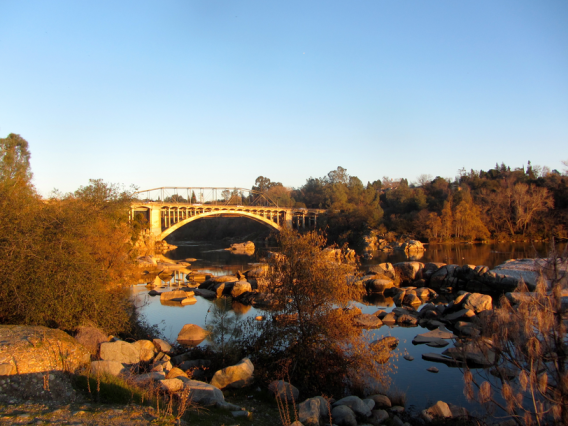 Imagine living on a hillside with views of Folsom Lake, the snow-capped Sierra Nevada and the city of Sacramento.  Or picture settling into a small, friendly neighborhood where everybody knows your name.  Both scenarios reflect the appeal — and the contrasts — of El Dorado Hills.

The concept of neighborhoods originated with developer Allen H.  Lindsey, who named the community El Dorado Hills after purchasing 20 parcels of ranchland, totaling 11,000 acres, in 1959.  That’s when he began work on a master plan for a large-scale community, said his daughter, Valerie Lindsey, who worked with her father in the development business for 25 years.  Lindsey eventually sold his development firm to the John Hancock Insurance Co., but his vision of a community of individual neighborhoods continues.

Sue and Jeff Field moved to El Dorado Hills 10 years ago, selecting a home in the Woodridge neighborhood — near Bridlewood Canyon where Barnes lives.  “People said this area used to be Cameron Park but became part of El Dorado Hills when the fire station was built,” Sue Field said.  “We were attracted to it because it’s a nice community and is close to everything — the El Dorado Hills Town Center and the (Highway 50) freeway — yet we feel we’re in the country.  It’s quiet.”

The Fields have an acre lot with a view of Bass Lake.  Neighborhood residents include people who are retired, middle-age people and younger people with families.  “It’s really peaceful,” Field said.  “I feel like we’re getting away, but not far away.  We’re really pleased with the move.”

Bob and Kristi Bashore found a home for their blended family of four children in a larger neighborhood — the master-planned Serrano development.  “We lived in Davis and wanted a bigger house where the kids could each have their own room,” Bob Bashore said.  “We started looking in Davis, then went east until we found a home in Serrano with five bedrooms and an office.”

That was eight years ago, when Bashore worked from his home as a graphic designer.  “Kristi was familiar with the foothills,” he said.  “Now we’re a couple of miles from her mom.  It’s a nice area with good schools.  The kids were more active when they were younger.  Kristi’s boys played Little League and soccer, and one played football in high school.” The family enjoys El Dorado Hills and the Serrano area, where Bashore likes to walk and his wife runs on the nearby trails.

El Dorado Hills has plenty of options for walking, hiking, bicycling and other outdoor activities.  The El Dorado Community Services District maintains 70 acres of community parks and multi-use athletic fields.  Among the 28 parks is one named for community founder Allen H.  Lindsey.

The district also oversees recreation programs for all ages, a community pool and a skate park.  “The schools are fabulous,” Barnes said.  “We have a daughter attending the University of Oxford (in Great Britain), and I think that has a lot to do with Oak Ridge High School and the wonderful counselors there.” Elementary and middle school students attend schools in the Buckeye Union or Rescue Union school districts.  Older students attend Oak Ridge, Ponderosa or Union Mine high schools.

Shopping and services are convenient.  The Town Center off Highway 50 offers retailers, a grocery store, specialty shops, services, a movie theater and restaurants.  “It is a jewel,” Field said.  Business is growing, said Linda Ellen Anderson, chairman of the board for the El Dorado Hills Chamber of Commerce and a Realtor with Coldwell Banker.

“Selland’s Market-Cafe is doing exceptionally well at Town Center, and a new nightclub, Reunion, has opened up behind Selland’s,” she said.  Town Center hosts a popular farmers market on Sunday mornings and live concerts on Thursday nights.  New in the El Dorado Hills Business Park is Business Workspaces, where people can rent furnished office space or conference rooms, Anderson said.  The business park is home to approximately 200 companies.

Approximately 50 villages are noted in “The El Dorado Hills Handbook,” far more than the original dozen Lindsey planned.  His vision continues today as builders offer new homes in scenic areas of town.  “We’re above the valley fog and below the snowline,” Barnes said.  “We love our hills — the community is lovely and beautiful.”