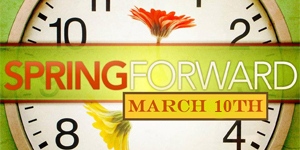 On March 10th, most Americans will set their clocks forward by one hour, or run the risk of getting to work an hour late.  Widespread observance of daylight saving time occurred during World War II, but became less common in the years following. This quirky national time change has a long standing history in the United States, which explains much of the confusion around the occurrence.

Bill Mosley, a public affairs officer for the U.S. Department of Transportation tried to explain the logic behind daylight saving time. He said that the fundamental drive behind DST is “to adjust daylight hours to when people are most awake and about.”

DST remained relatively unchanged from this point until 2007, when congress voted to extend the time frame by one month, including the last few weeks of the month of March.

This change in time provides many benefits that often go unnoticed. It increases energy savings, decreases the number of traffic accidents, reduces crime, and expands economic activity by allowing sunlight during peak shopping hours and increase hours of overlap between U.S. and European business activity.