Gov. Jerry Brown announced a state of emergency Friday that has been all but official for weeks: California is in a drought. 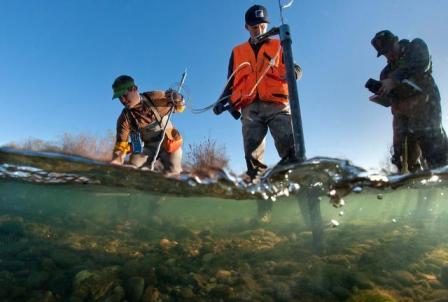 Brown urged Californians to reduce water use by 20 percent, saying “we’re facing perhaps the worst drought that California has ever seen since records began being kept about 100 years ago.”

The emergency declaration comes as the state suffers through dry conditions for a third straight year. It follows weeks of consideration by the Brown administration amid pressure to act from lawmakers and water officials.

The Democratic governor had suggested for days that he was close to declaring the emergency, a measure aimed at focusing the attention of the public as well as federal officials who could accelerate some relief efforts.

His appeal to residents to reduce water consumption is voluntary, but he suggested at a news conference in San Francisco that the state could impose mandatory restrictions if the drought persists.

“As we go down the road – you know, January, February, March – we will keep our eye on the ball and intensify, even to the point of mandatory conservation,” Brown said. “But we’re not going to do that quite yet.”

California is entering one of the driest winters on record after two dry years already parched the state. Many reservoirs are depleted, and streams and rivers are running low. American River flows are at their lowest level in two decades, while Folsom Lake has receded so dramatically that remnants of a Gold Rush-era mining town, long submerged, have been exposed.

Sacramento has had no rain since Dec. 7 and will likely soon break the record of 44 consecutive days without rain during the “rainy” season of November through March.

The U.S. Climate Prediction Center forecasts below-average precipitation in California for the rest of January and all of February, according to figures released Thursday, while the National Weather Service predicts no precipitation in the Sierra Nevada, which supplies much of the state’s water, during the next seven days.

The dry weather is due to high pressure off the coast that is preventing storm systems from developing, said Brad Pugh, a meteorologist with the U.S. Climate Prediction Center.

“We’re expecting drought conditions across California to intensify over the next few months,” Pugh told The Bee.

About three-quarters of the fresh water used in California goes toward irrigating farms, according to the U.S. Geological Survey, and the counties that use the most water – Fresno, Kern, Tulare and Imperial – all are focal points for agriculture in the state. Together, those counties use five times as much water as Los Angeles County.

Karen Ross, secretary of the California Department of Food and Agriculture, said 200,000 or more acres of farmland could be fallowed this year due to drought.

“That’s a lot of miles of open land,” she said.

Brown, governor before from 1975 to 1983, called for a 25 percent reduction in personal water use when drought gripped the state in 1977, but conservation efforts have picked up in the years since.

Agricultural water use declined by about 23 percent from 1980 to 2005, even as production increased, according to the Public Policy Institute of California. Urban residential water use per capita is also declining, though most of the drop has been offset by population growth.

Brown said Friday that weathering the drought will take “a coming together of all the people of California to deal with this serious and prolonged event of nature.”

Yet for generations the limitations of California’s water supply have caused rifts, and the current drought is likely to accentuate debate over a $25 billion water project that Brown has made a priority of his third term.

At his appearance in San Francisco, Brown sought to use the drought to his advantage, arguing long-term water management will be improved by his plan to build two tunnels to divert water around the Delta to the south.

“I think it makes the case that more water can be saved if you have a Delta facility,” he said.

Brown also suggested the state will press the federal government to accelerate environmental reviews of the project.

Restore the Delta, a group opposed of Brown’s plan to build the tunnels, said in a statement that with California now in its third straight dry year, there is no surplus water to export.

The last drought emergency in California was declared by then-Gov. Arnold Schwarzenegger in 2009 and lifted by Brown in 2011.

Last year, with the state becoming drier once again, Brown issued an executive order directing the State Water Resources Control Board and Department of Water Resources to expedite their processing of voluntary water transfers.

Some environmental groups expressed concern that fine print in Friday’s drought declaration could lead to disruptive changes in how water is distributed. For instance, the drought declaration directs the State Water Resources Control Board to “immediately” consider petitions that would consolidate “places of use” for water diversions now held separately by the State Water Project and the federal government’s Central Valley Project.

These two separate diversion systems in the Delta require a state permit to combine places of use so they can jointly use the proposed tunnels. Such an action would normally require months, if not years, of careful review and public comment.

Ronald Stork, a senior policy advocate at Friends of the River in Sacramento, said that if “place of use” is consolidated, federal water such as that held in Folsom Reservoir could be sent to Disneyland to keep the roller coasters operating. Currently, most of that water is designated for agriculture.

“That’s a titanic shift of purpose for the federal water project,” Stork said. “I think the water board needs to think this one through very carefully before they give the go-ahead to consolidating these two very different projects.”

Others worry about provisions in the declaration that waive the California Environmental Quality Act and direct the water board to set aside Delta water quality provisions that benefit numerous fish species, which are already imperiled.

“It means the focus of the drought-related measures is to expedite water movement and eliminate environmental protections,” said Bill Jennings, executive director of the California Sportfishing Protection Alliance. “For an estuary that’s already hemorrhaging from past mismanagement, that’s difficult to accept.”

Brown said that after declaring the drought emergency he doesn’t know how much assistance the state might receive from the federal government, though he said, “We’re going to get some.”

The U.S. Department of Agriculture on Wednesday designated parts of 11 states, including California, as primary natural disaster areas due to drought. The designation, which includes Sacramento, Fresno and San Luis Obispo counties, makes certain farmers eligible for low-interest emergency loans to cover losses.

Meanwhile, water districts and local governments throughout the state have enacted conservation measures, including a water rationing order by city officials this week in Sacramento.